The vertebral column consists of 33 bony vertebrae grouped into five regions. Each vertebra is joined to the one above and the one below by cartilaginous intervertebral discs, articular facets and ligaments. These give the vertebral column stability and mobility.

Babies are born with only one C-shaped curve of the spine, called the primary curvature. In the thoracic and sacral regions this curve persists into adulthood owing to the shape of the vertebrae themselves. The secondary curves are postural and develop in the cervical and lumbar regions when, as infants, sufficient muscle strength is developed to hold the head up and to walk.

Although there are variations in the anatomy of vertebrae in different regions, all the vertebrae (with the exception of the first cervical vertebra (C1)) have three features in common

Each neural arch supports seven processes allowing for the attachment of muscles and ligaments:

The pedicles of a typical vertebra are notched above and below. The notches of two adjacent vertebrae form, one on either side, an intervertebral foramen, through which the ventral root of a spinal nerve exits the vertebral canal.

Boundaries of an invertebral foramen

Between each vertebral body is an intervertebral disc, a cartilaginous structure that provides articulation between adjacent vertebral bodies 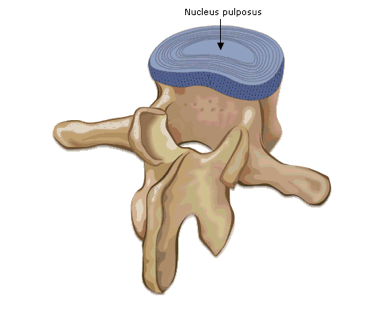 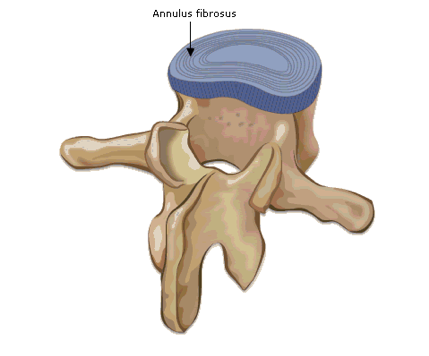 Each disc has two parts:

Attachments of the intervertebral discs:

DISC PROLAPSE
If the nucleus pulposus herniates through the fibrous tissue surrounding it, it can put pressure on an individual nerve root or the spinal cord. This is a disc prolapse, or in layman’s terms, a ‘slipped disc’.

Intervertebral disc degeneration leading to prolapse is most common at the top and bottom of the lumbar region.