The uterus is a pear-shaped organ. Its average size is approximately 5 cm wide by 7 cm long (approximately 2 in by 3 in) when a female is not pregnant. It has three sections: 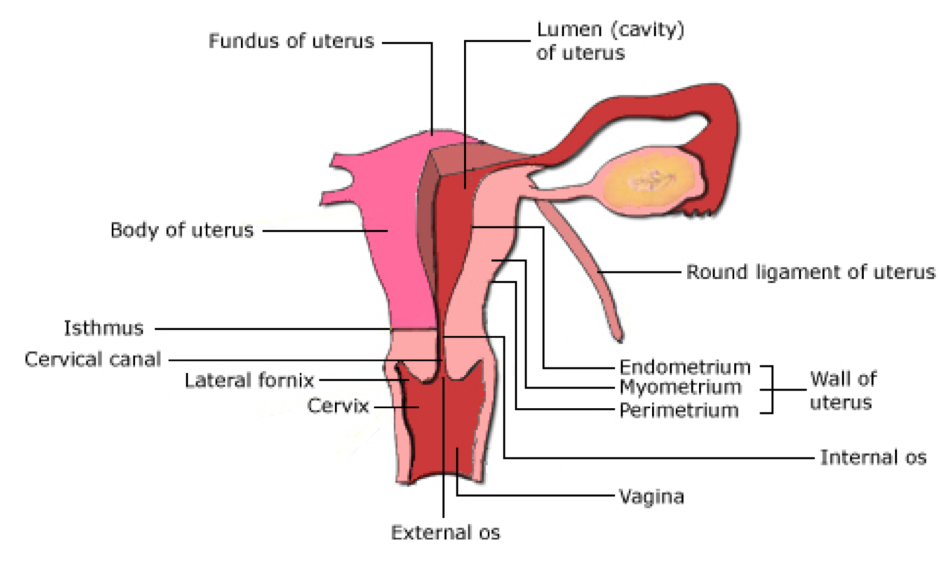 The body of the uterus narrows to a waist termed the isthmus, continuing into the cervix which is embraced about its middle by the vagina; this attachment delimits a supravaginal and vaginal part of the cervix.

Uterine and cervical appearances change with the phase of menstruation. The myometrial and cervical stromal signal increases in the second half of the cycle. When performing a hysterectomy, good knowledge of the blood supply and adjacent anatomy is critical.

The uterine artery (from the internal iliac) runs in the base of the broad ligament and crosses above and at right angles to the ureter to reach the uterus at the level of the internal os. The artery then ascends in a tortuous manner alongside the uterus, supplying the corpus, and then anastomoses with the ovarian artery.

The uterine artery also gives off a descending branch to the cervix and branches to the upper vagina.

The veins accompany the arteries and drain into the internal iliac veins, but they also communicate via the pelvic plexus with the veins of the vagina and bladder.

Lymphatic drainage of the uterus is via the iliac, sacral, aortic and inguinal lymph nodes. Specifically:

Always examine the inguinal nodes in a suspected carcinoma of the corpus uteri—they may be involved by lymphatic spread along the round ligament.

The wall of the uterus is made up of three layers:

Several ligaments maintain the position of the uterus within the abdominopelvic cavity.

The broad ligament is a fold of peritoneum that serves as a primary support for the uterus, extending laterally from both sides of the uterus and attaching it to the pelvic wall.

The round ligament attaches to the uterus near the uterine tubes, and extends to the labia majora. Finally, the uterosacral ligament stabilizes the uterus posteriorly by its connection from the cervix to the pelvic wall.