The base of the adult breast extends vertically from the 2nd to 6th ribs. Horizontally, the breasts extend from the lateral border of the sternum to the midaxillary line and, in some individuals, into the axilla itself.

The adult breast consists of glandular and adipose tissue, together with a system of connecting ligaments. Below is a cross-section of the breast, showing those structures from the skin to the underlying ribs. 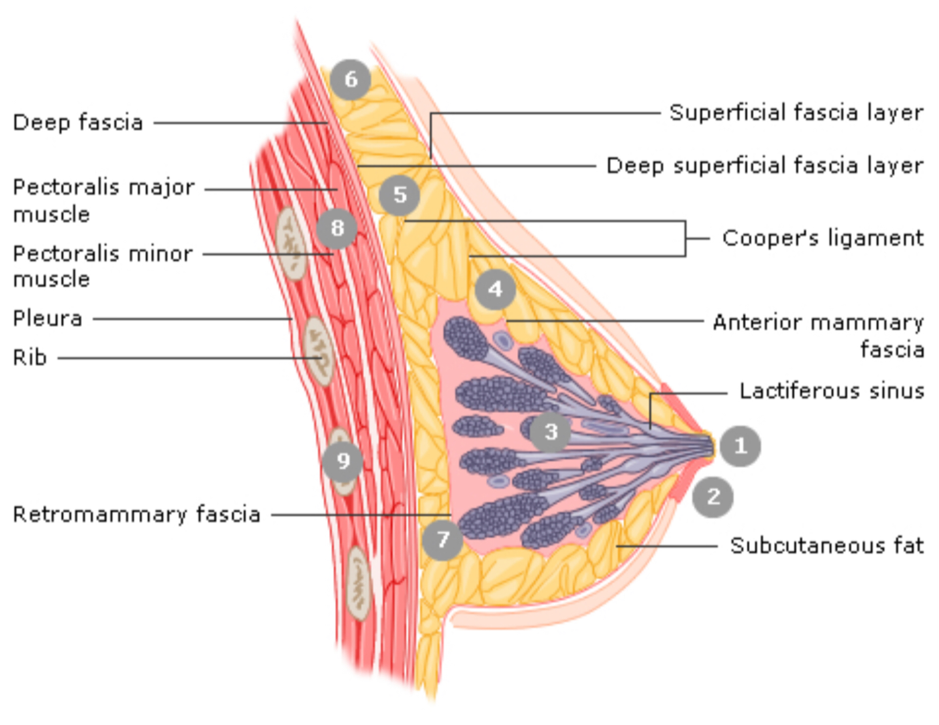 1. Nipple: This is located at the apex of the breast and projects up to 1 cm. Optimising its positioning is of utmost importance in breast surgery.

In the average adult female the nipples lie in the midclavicular line, 19-21 cm from the sternal notch and 9-11 cm from the midline but their position varies widely according to shape, size and age

2. Areola: This is a roughly circular area of skin that surrounds the nipple. Its colour darkens during pregnancy due to the deposition of melanin. The areolar skin contains Montgomery glands which secrete a protective oily lubricant 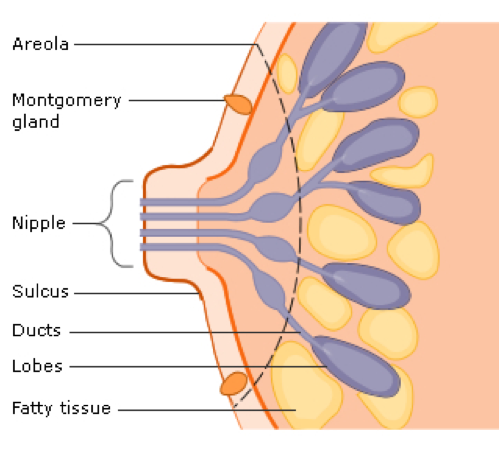 3. Glandular tissue: The glandular tissue is the functional component of the lactating breast and the site of milk production, which is passed to the nipple via a system of ducts.

The breast mound is roughly hemispherical. The bulk of the glandular tissue is found in the upper outer quadrant, which is the commonest site of malignancy.

4. Adipose tissue: This forms up to 70% of the breast mass and is the main determinant of breast size.

5. Ligaments: The structure and shape of the breast is maintained by fascial and ligamentous supports, as first described by Sir Astley Cooper in 1840.

Suspensory ligaments of Cooper: These fibrous strands extend through the breast parenchyma between the layers of the superficial and deep (pre-pectoral) fascia. They help to maintain a non-ptotic breast shape.

6. Axillary tail (of Spence): There is a variable extension along the inferior edge of pectoralis major towards the axilla. This usually lies within the subcutaneous fat but may penetrate the axillary fascia to lie adjacent to the lymph nodes. Occasionally it is a separate entity with ducts that do not drain to the nipple.

7. Retromammary space: In reality this is not a space but a plane of loose connective tissue lying between the deep lamina of the superficial fascia and the deep pre-pectoral fascia.

This is the plane of dissection in which a subglandular pocket can be created for insertion of a prosthesis for breast augmentation.

8. Muscle: The medial two-thirds of the base of the breast lie over the pectoralis major muscle. The lateral one-third lies over serratus anterior and a small portion of the rectus abdominis and external oblique muscles.The muscles are separated from the breast by the deep fascia.

9. Rib cage: Deformities of the ribs, including those that are secondary to a spinal deformity can lead to an apparent asymmetry of breast position and/or shape.

The breast has a rich blood supply, which permits safe division and excision of breast tissue, for example during breast reduction surgery. However, the viability of the nipple areolar complex is dependent on vessels that pass through the gland, which must therefore be preserved.

There are three main arterial systems: 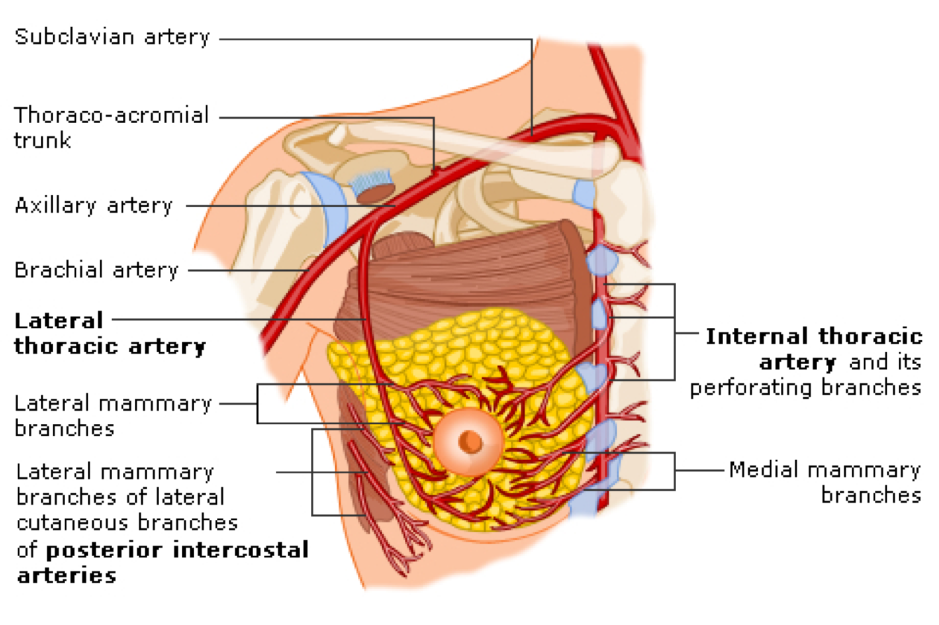 Approximately 60% of the vascular supply to the breast is through the internal thoracic artery.

The 2nd and 3rd perforators are the predominant vessels and these are preferred for anastomosis when reconstructing the breast with a free tissue transfer.

The lateral thoracic artery, a branch of the second part of the axillary artery, supplies the upper outer quadrant of the breast.

Other branches of the lateral thoracic artery perforate pectoralis major to supply the overlying breast tissue.

The axillary artery also provides other branches to the breast, including the superior thoracic artery (a branch from the first part of the axillary artery), the pectoral branch of the thoracoacromial artery and the subscapular artery.

The venous drainage of the breast is via two venous systems:

The superficial system lies within the subdermal venous plexus. The pattern of drainage is highly variable.

The lateral thoracic veins drain into the axillary vein. 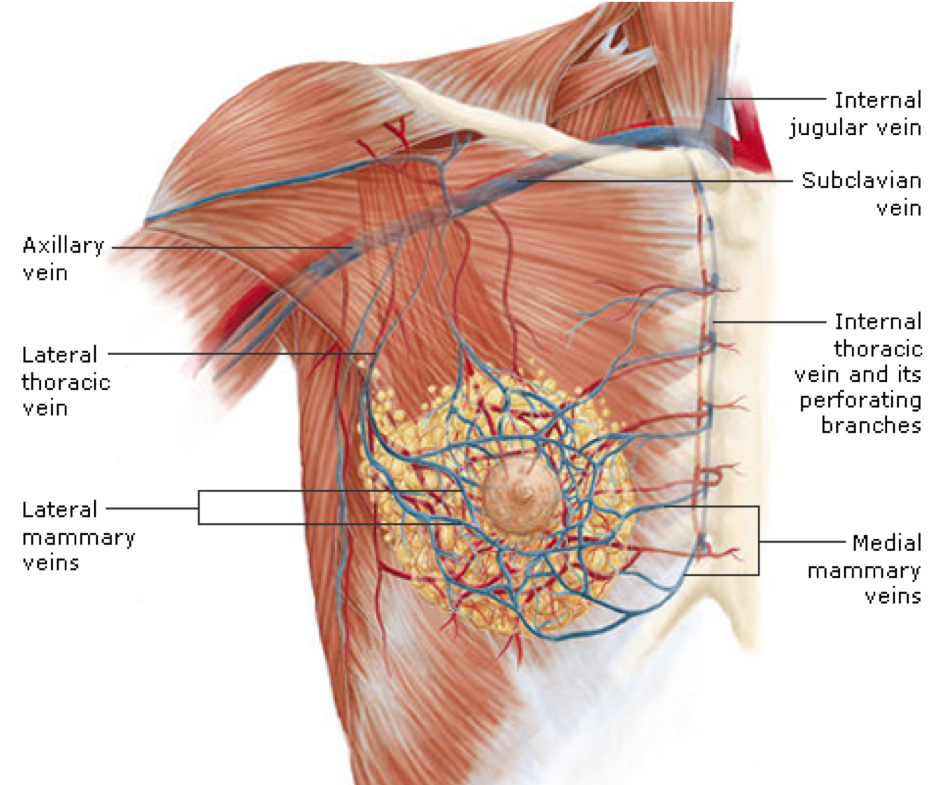 The nerve supply to the breast consists of sensory fibres from the skin and sympathetic efferent fibres to the blood vessels, glandular tissue and smooth muscle cells in the skin and nipple. 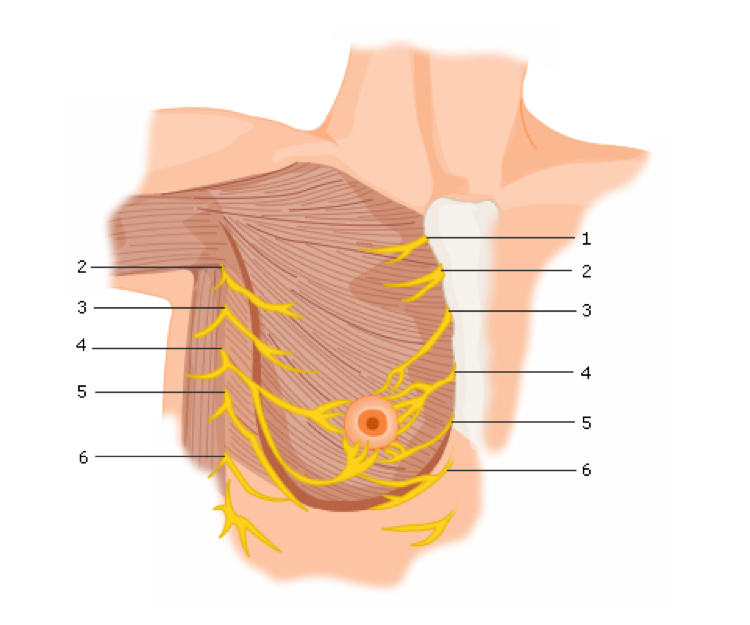 The sensory nerve supply is derived from cutaneous branches of the intercostal nerves:

Knowledge of the lymphatic drainage of the breast is crucial to understanding the route of metastasis of breast cancer. Broadly speaking, lymph can drain to the ipsilateral axilla, the contralateral breast and to the abdomen. There are anastomoses across the midline and to the abdominal wall, which allow metastasis to the opposite axilla, peritoneum and liver 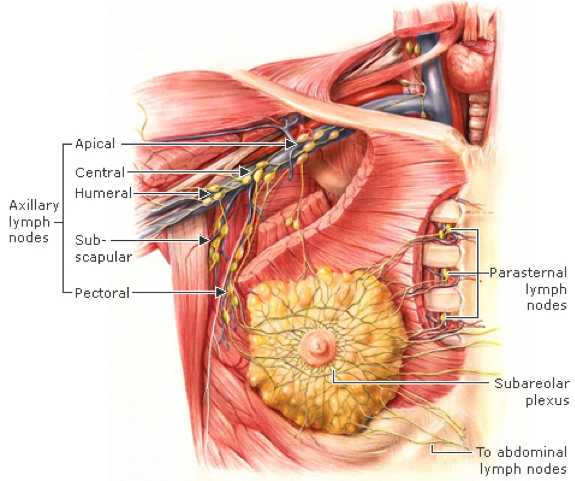 The microscopic structure of the breast varies with age, the menstrual cycle, pregnancy and lactation. 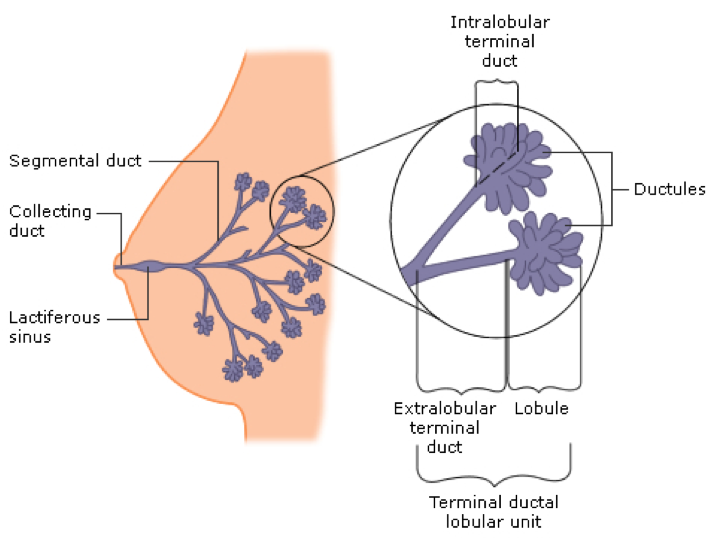 In a mature resting breast, the glandular tissue is contained within 15-25 lobules in each breast, each lobule consisting of 20-40 terminal ductal lobular units.

Each lobule is separated from its neighbours by dense connective tissue and a variable amount of adipose tissue. In effect, each lobule is a gland in itself, with its own drainage system.

These lobules drain into lactiferous ducts, which converge radially to open individually on the apex of the nipple. Near their openings onto the nipple, each duct dilates to form a lactiferous sinus or ampulla.

After the menopause the breasts shrink in size due to atrophy of the secretory portion of the glandular tissue. Atrophy of the interstitial connective tissue is responsible for the changes in the shape of the older female breast.

The terminal ductal lobular unit is composed of sac-like acini that are responsible for milk production, which are connected to the ductal system via the terminal duct. 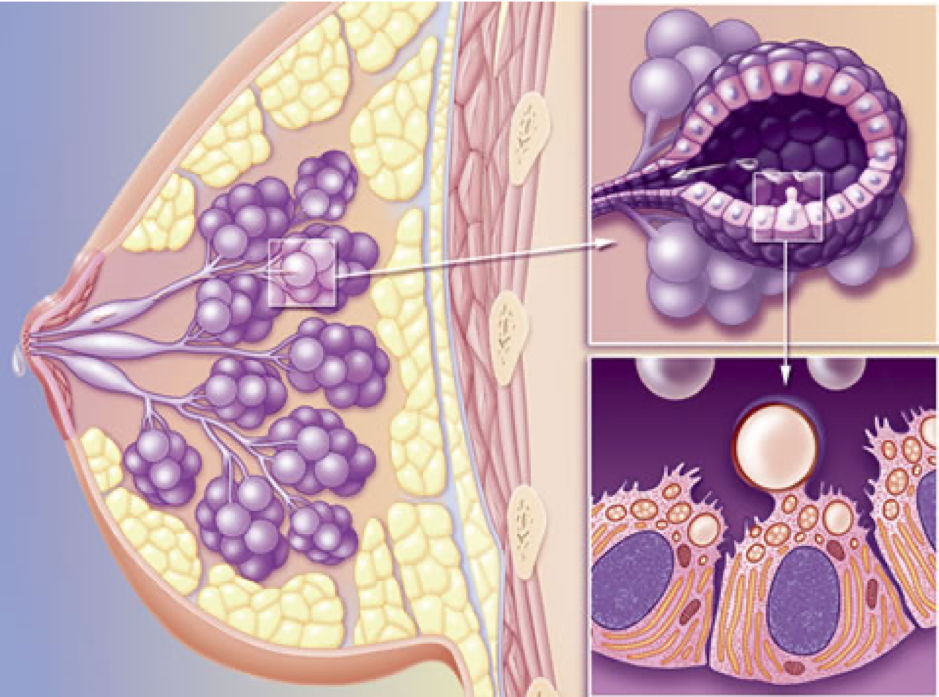 The spaces around the lobules and the ducts are filled with a stroma of adipose and connective tissue which contain large numbers of lymphocytes and plasma cells. The latter increase in number at the start of lactation and are responsible for synthesis and release of the immunoglobulins that convey passive immunity to the new-born.

Close to the opening of the lactiferous ducts on the nipple, the lining changes to keratinised stratified squamous epithelium, which is continuous with the external skin. Within the ducts, this is shed and forms keratin plugs in non-lactating breasts.

In the adult female breast the lactiferous ducts are between 2 and 4.5 cm long and converge on the mammary papilla or nipple.

The nipple and areola are composed of dense, collagenous connective tissue. The nipple contains between 15 and 25 duct openings, each about 0.5 mm in diameter.

Sebaceous and Montgomery glands open directly onto the nipple surface. Extrusion of their contents provides lubrication.

The male breast is similar in structure to the undeveloped, juvenile female breast but it lacks lobules. The nipple and areola are smaller than those of the adult female and they are in a fairly constant position, level with the fourth intercostal space but this can vary according to age and body shape.

Enlargement of the male breast (gynaecomastia) can be caused by hypertrophy of the glandular or adipose component, or both. Physiological gynaecomastia can occur in neonates, adolescents and the elderly. It can also occur as a side effect of certain drugs (prescribed or otherwise), as a feature of some chronic diseases (e.g. cirrhosis of the liver) or secondary to the effects of a hormone-secreting tumour (e.g. testicular cancer, prolactinoma, bronchogenic carcinoma).

Cancer is rare in men but can occur in the glandular component of the male breast.