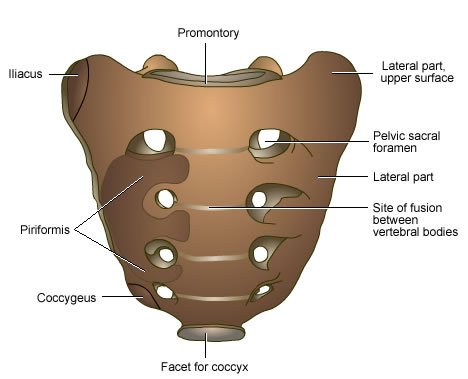 The sacrum is an irregular, triangular shaped piece of bone made up of the five fused sacral vertebrae. It is concave anteriorly, convex posteriorly, and is wedged and stabilized between the iliac bones by the sacroiliac joints.

The superior part of the sacrum articulates with the fifth lumbar vertebra via an intervertebral disc and articular (facet) joints, just as the other vertebrae do.

Some of the component parts of the original vertebrae can still be recognized within the sacrum.

The sacrum has five surfaces, anterior, posterior, two lateral surfaces and a base.

The pedicles, laminae, transverse and spinous processes fuse to form an irregular surfaced plate. From medial to lateral you will find:

From medial to lateral the anterior (pelvic/ventral) surface of the sacrum has the following features:

The base of the sacrum is actually its upper surface and comprises:

The upper opening forms part of the base of the sacrum and it ends inferiorly at the sacral hiatus.

The laminae of the fifth sacral vertebra fail to fuse in the midline in over 90% of people leaving a triangular gap at the lower end of the median crest. This triangular gap is called the sacral hiatus

Borders of the sacral hiatus:

The position of the sacral hiatus can be identified from surface markings. A horizontal line drawn between the posterior superior iliac spines forms the base of an equilateral triangle, with the hiatus lying at the point of the triangle inferiorly. The posterior superior iliac spines can be identified by two skin dimples which overlie them. The sacral hiatus can be palpated as a depression. To identify the position of the hiatus more accurately, the inferior end of the median sacral crest, the two cornua of the sacrum and the tip of the coccyx can also be palpated through the skin at the top of the natal cleft. In an adult the distance from the sacral hiatus to the tip of the coccyx is approximately the same as the distance from the tip of their index finger to their proximal interphalangeal joint.

Once the sacral hiatus is identified the overlying skin is carefully cleaned with antiseptic solution. A 22 gauge short bevelled cannula or needle is directed at about 45o to the skin and inserted till a ‘click’ is felt as the sacrococcygeal ligament is pierced. The needle is then carefully directed in a cephalad direction at an angle approaching the long axis of the spinal canal.