The liver is the largest internal organ, and weighs about 1.5 kg in humans. It is located in the right upper quadrant, where it is closely applied to the abdominal wall and the diaphragm.

In addition to being an accessory digestive organ, it plays a number of roles in metabolism and regulation. The liver receives protection from the surrounding ribs.

Visually, the falciform ligament along the upper surface divides the organ into uneven right and left lobes. These anatomical lobes have no functional significance.

Functionally, the liver is divided into two roughly equal parts, the true right lobe and the true left lobe, on the basis of its blood supply and biliary drainage.The plane of demarcation between these physiological lobes is located along a line that joins the tip of the gallbladder to the groove of the inferior vena cava on the inferior surface of the liver.

The liver can be further divided into eight functional segments, also based on vascular distribution and biliary drainage. These segments are numbered; one to four are in the left lobe, and five to eight in the right lobe. This is important to know especially for radiologist to communicate where specific lesions are located.

In the right lobe, some anatomists also identify an inferior quadrate lobe and a posterior caudate lobe, which are defined by internal features.

The liver is connected to the abdominal wall and diaphragm by five peritoneal folds referred to as ligaments. These are the falciform ligament, the coronary ligament, two lateral ligaments, and the ligamentum teres hepatis. 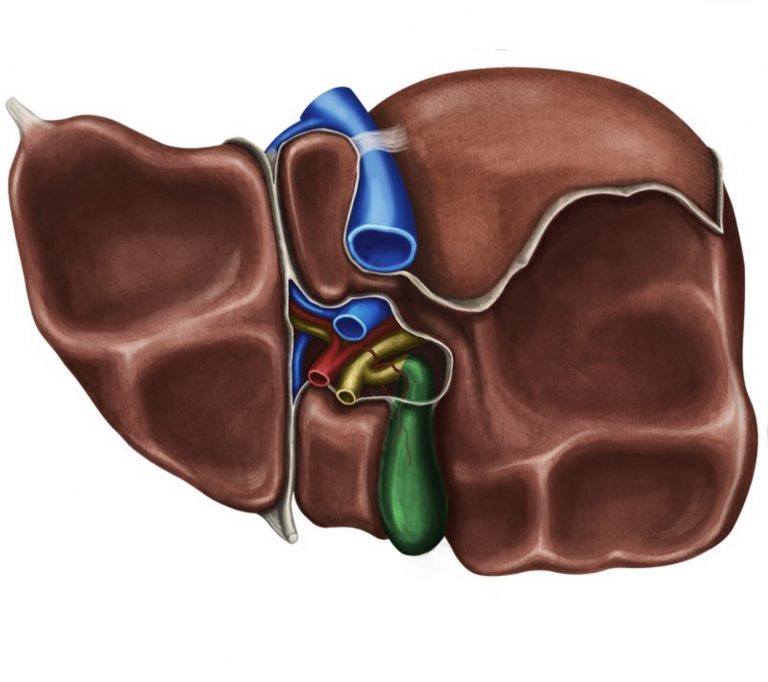 There is an H-shaped fissure on the posterio-inferior surface of the liver.

The porta hepatis (“gate to the liver”) is where the hepatic artery and hepatic portal vein enter the liver. These two vessels, along with the common hepatic duct, run behind the lateral border of the lesser omentum on the way to their destination.

Between the limbs of this ‘H’ lies the quadrate lobe in front and the caudate lobe behind.

The portal triad is enclosed in the hepatoduodenal ligament (HDL), composed of 2 layers of lesser omentum and contains the: