Bone is composed of a calcified organic matrix and architecturally exists in two main forms: 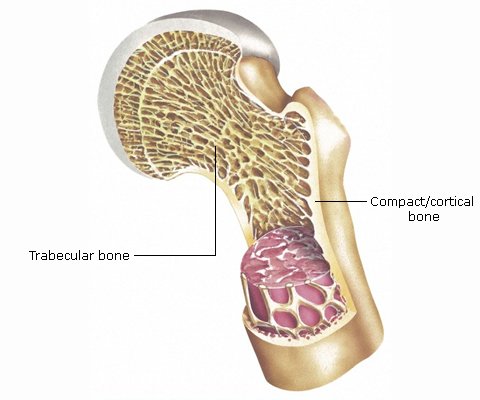 A fracture is a complete disruption in the continuity of bone.

If only some of the trabeculae are completely severed while others remain intact or bent the fracture is incomplete. An example of this is a greenstick fracture.

In children bone can bend rather than break. When there is buckling of the cortex the term ‘torus‘ fracture is used. These can be subtle and are usually best seen on the lateral view.

Occasionally there is a greenstick fracture of the cortex on one side and a torus fracture on the other. This is called a lead pipe fracture.

The term ‘simple’ fracture is used when there is a single fracture line. When there are more than two fragments it is described as ‘comminuted‘. This may be additionally qualified as ‘slightly’, ‘moderately’ or ‘severely’. Further specific terminology refers to a ‘butterfly’ fragment which is an elongated triangular fragment of displaced cortex which occurs on the concave side of the injury.

A segmental fracture consists of a segment of the shaft isolated by a proximal and a distal line of fracture.

The distinction between closed and open fractures is not generally made radiographically.

The alignment of the fracture is described by the position of the distal fragment with regard to:

Transverse fractures run at right angles to the long axis of the bone, they are relatively uncommon in the shafts of normal bone. 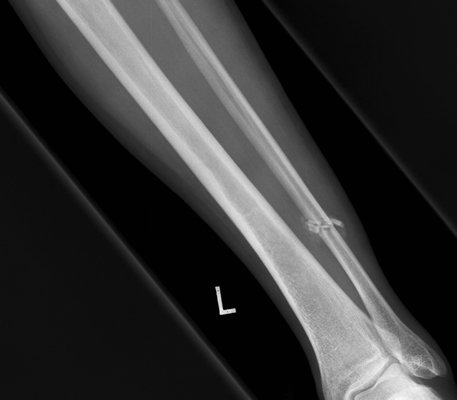 They occur in the tibia and fibula as a result of a direct blow. More often, there is an accompanying vertical load that results in some angulation of the fracture.

They are more common in irregular bones, such as the navicular. Tension in ligaments can cause sufficient force to result in a transverse ‘avulsion’ injury.

Oblique fractures run a course of approximately 45° to the long axis of the bone. It is the result of angulation or angulation plus compression. This is a frequent mode of injury.

A spiral fracture encircles the shaft and is longer than an oblique fracture. It is created by torsional forces.

The ends of a spiral fracture are pointed.

A compressive force that pushes the end of one bone into another bone can result in a vertically or longitudinally orientated fracture. This is more commonly found as a component of a comminuted fracture.

It is of particular importance to recognise when intramedullary fixation is contemplated.

Acute injuries of bones and joints result from applications of forces to the skeleton that exceed the strength of tissues.

A bone fracture initiates a sequence of inflammation, repair and remodelling.

This occurs over the first 48 hours.

Haematoma formation occurs at the site of the fracture (medullary canal, between fracture ends and beneath elevated periosteum). Inflammatory mediators cause local blood vessels to dilate.

There is migration of inflammatory cells into the region with cytokine release causing local angiogenesis.

This process happens in the first 7-10 days.

The inflammatory reaction reduces and necrotic tissue is resorbed. Widening of the fracture line and blurring of the apposition margins is the earliest radiographic manifestation of repair. Stem cells proliferate into chondroblasts and fibroblasts.

A soft fracture callus is produced (a matrix of fibrous tissue and cartilage). The fibrous granulation tissue is progressively replaced with hyaline cartilage, forming a tough bridge of connective tissue.

At this stage the soft callus is radiolucent.

This occurs within 3-4 weeks after the fracture.

The hyaline cartilage forms a firm but flexible bridge across the fracture site. Hydroxyapatite crystals are deposited within the type 1 collagen fibrils.

As mineralisation proceeds the bone ends gradually become enveloped in a mass of callus and this ‘hard callus’ is evident on plain films. It is initially fluffy and amorphous.

The fusiform mass of callus continues to be calcified through osteoblastic action.

Under the influence of functional stresses the bridging trabecular bone is remodelled.

Woven bone is replaced by lamellar bone and there is resorption of callus that is no longer needed.