The human face comprises layers of skin, fat and muscle overlying a bony supporting skeleton. The shape of the facial skeleton and the thickness of the overlying structure are what give each face its individuality.

The exquisite innervations of the facial muscles enable us to adopt a wide range of facial expressions, most of which reflect our inner emotions, sometimes against our will. These give non-verbal cues to others, and are essential in normal human interaction.

Loss of these muscles through stroke, functional disruption or Bell’s palsy profoundly alters the appearance of the face, and the sufferer’s perception of their well-being and interaction with others. 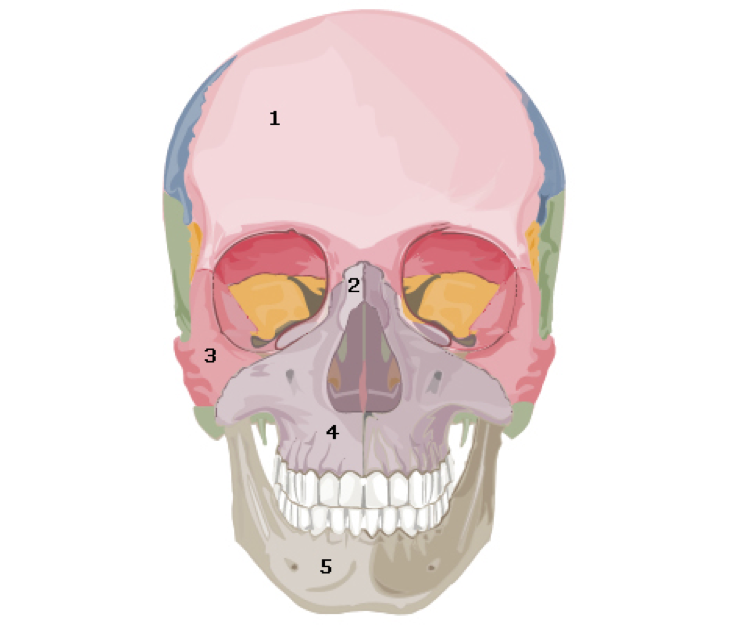 The facial skeleton is made up from five bones on each side:

The frontal, maxillary and zygomatic bones on each side form the walls of the orbital cavities, which houses and protects the eye. For further study of the orbit, refer to session: Module 07a/Nervous System/Bony Orbit and Extra-Occular Contents.

Another cavity, bordered by the two maxillary bones and nasal bones, surrounds the internal nose and nasal airway.

The mandible articulates with the glenoid fossa of the temporal bone at the base of the skull. There is a range of normal mouth opening due to the variation in mobility, size and shape of the mandible.

When observed from the front, the view of the skull is known as the Frankfort plane. This approximates to a normal anatomical position with the eyes looking forwards. In this position, a line passes from the highest point of the ear canal through to the lowest point of the eye socket.

It may be represented by placing a skull on a table with a 5 cm block under the foramen magnum, leaving the front of the mandible resting on the table top 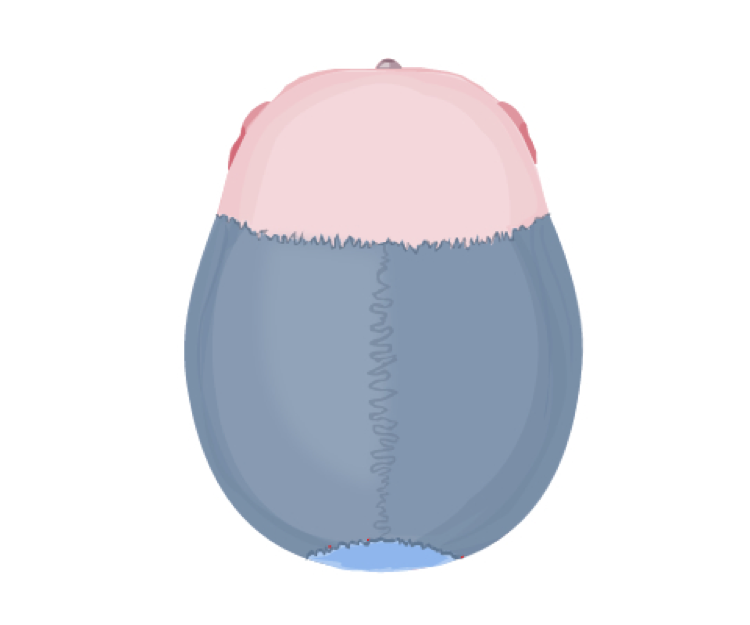 The junction between the frontal bone and the nasal bones is called the nasion.

In the new born the two fontanelles, anterior and posterior, are defects in the integrity of the skull that allow deformation of the skull during its passage through the birth canal, and also further growth throughout childhood.

Pressing on the larger anterior fontanelle directly raises the intracranial pressure and causes bradycardia in neonates.

By adulthood, the frontal bone will have fused completely and the two fontanelles, anterior and posterior, will have ossified providing continuity of the bony skull vault. The sagittal and coronal sutures are still visible in the adult. At the back of the skull, the parietal bones butt onto the occipital bone.

The zygoma, or malar bone, is a bone that forms the support for the cheeks

In a facial injury, it is often subject to a depressed fracture and may require surgery to reinstate the correct profile, a so called ‘malar lift’. Together with the maxilla, it comprises the front of the face and the lateral and infraorbital rim of the orbit.

The two nasal bones articulate with the frontal bones above, and the maxilla on each side.

Inferiorly, the nasal bones form the superior border of the pear shaped piriform aperture and the beginning of the nasal airway.

In the middle of the piriform aperture is the bony nasal septum, separating the left and right nasal passages from each other.

The maxilla forms the front of the facial skeleton from the infraorbital margin to the upper alveolus which carries the teeth. 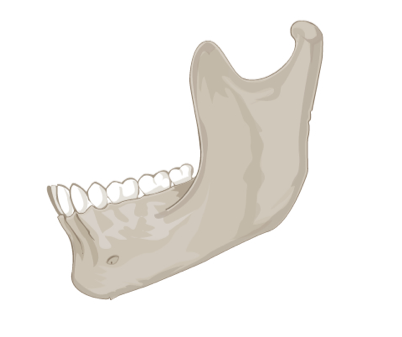 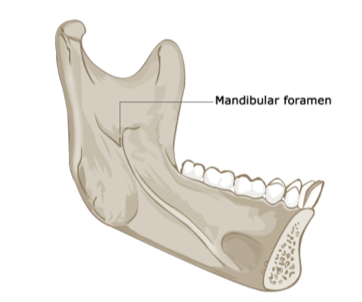 The mandible consists of:

These are separated by the angle of the jaw.

The upper border is called the mandibular alveolus and corresponds to the alveolus of the maxilla in that it carries the lower teeth.

In the midline, at the front of the mandible is a swelling, which is known as the mental (or genial) protuberance. It is colloquially referred to as the ‘chin’. On each side of the mental protruberance lies a hole, the mental foramen through which passes the mental nerve and vessels.

The anterior border of the ramus blends into the body of the mandible through the oblique line.

On the medial surface of the ramus is the mandibular foramen. This provides entry to the mandibular canal through which passes the inferior alveolar nerve supplying sensation to the bottom teeth and jaw.

Superior to this is the bony lingual. The lingula provides the attachment for the sphenomandibular ligament.

On each side, the mandible articulates with the base of the skull at the temporomandibular joint.

The superior border of the mandible has two upward projections:

The coronoid process provides attachment for the temporalis muscle and lies partly behind the zygomatic arch.

The condylar process has a head and neck and provides the articular surface of the mandibular portion of the temporomandibular joint.

The temporomandibular joints allow movement of the mandible and opening of the mouth. The integrity of the joints is sustained by ligaments and muscles.

The next section of this session describes the ligaments and the joint cavity. 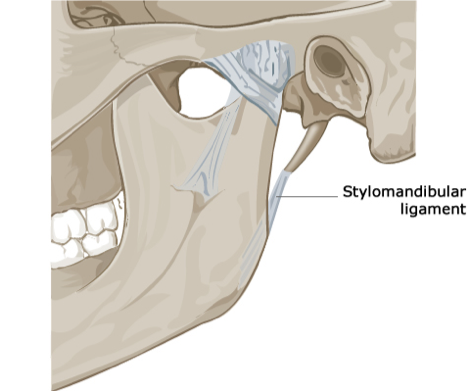 The stylomandibular ligament passes from the styloid process of the temporal bone to the posterior border of the ramus.

Each joint has an articular disc dividing the joint cavity in two, and is surrounded by a fibrous capsule

In front of the joint is a downwards projection, the articular tubercle 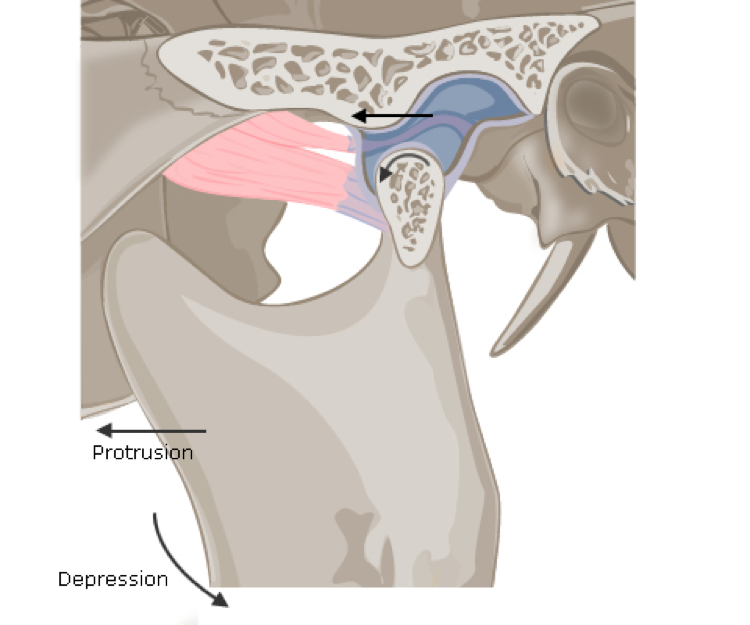 The temporomandibular joints allow opening and closing of the mouth and side to side movements during mastication (chewing). They also allow anterior subluxation of the lower jaw to a varying degree.

Opening of the mandible is provided by contraction of the digastric, geniohyoid and mylohyoid muscles

Closure of the mouth and biting is provided by three muscles: 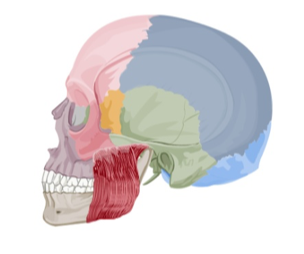 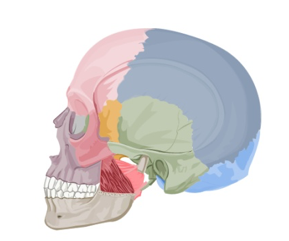 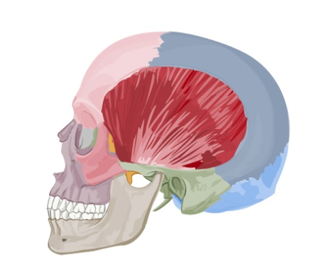 In facial trauma, there are three well recognized fracture lines in the midface. These were classified by the Frenchman, René Le Fort in 1900. Elective surgical osteotomies for the correction of facial deformity are referred to by the same classification.

The three fracture positions are given the following names: