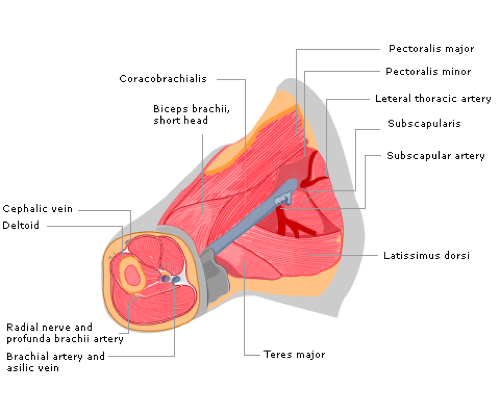 It is helpful to visualise the axilla as a pyramid.

The boundaries are formed by the: 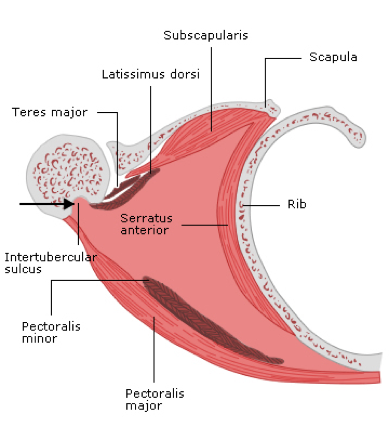 There are a number of important structures within the axilla that a surgeon must be aware of. These include some that will serve as landmarks when performing axillary lymphadenectomy and others where the intention is to avoid encountering them.

The long thoracic nerve is also known as the ‘nerve of Bell’.

The nerve emerges from roots of the fifth to seventh cervical nerves and runs down on the surface of the middle scalene muscle to pass between the first rib and axillary artery.

Damage to the nerve causes a ‘winged scapula’ deformity.

Damage to the nerve causes denervation of the latissimus dorsi, leading to muscle atrophy. There is loss of volume of the posterior axillary fold and weakness of shoulder abduction and internal rotation.

The medial pectoral nerve arises from the roots of C8 to T1 via the medial cord of the brachial plexus. It runs between the axillary artery and vein.

The medial pectoral nerve runs caudally with a series of thoracoacromial vessels until it enters the deep surface of the pectoralis minor muscle, which it supplies. Two or three branches pierce the muscle and supply the pectoralis major muscle.

Damage to the nerve causes atrophy of the sternoclavicular fibres of the pectoralis major, with infraclavicular wasting and loss of the anterior axillary fold.

These sensory nerves are important because they run transversely across the axilla, dividing it into deep and superficial compartments. In contrast, virtually all other important structures run vertically in the axilla.

The intercostobrachial nerves supply sensation to the inner aspect of the arm.

It is desirable, but not essential, to preserve these nerves during axillary dissection, because damage will cause a noticeable loss of sensation on the inner aspect of the arm.

The axillary artery is classically considered to consist of three parts:

The lateral thoracic artery (also known as the external mammary artery) arises from the second part of the axillary artery. It runs across the first intercostal space to supply the upper chest wall and breast.

The lateral thoracic vessels are in the superficial axillary compartment because they lie superficial to the intercostobrachial nerve.

From a purely anatomical perspective, there are five groups of axillary lymph nodes:

These drain the arm, chest and breast and form a lymphatic plexus around the axillary vein.

However, the lymph node anatomy of the axilla is better understood from a functional perspective, by considering the different levels of axillary lymph node dissection: 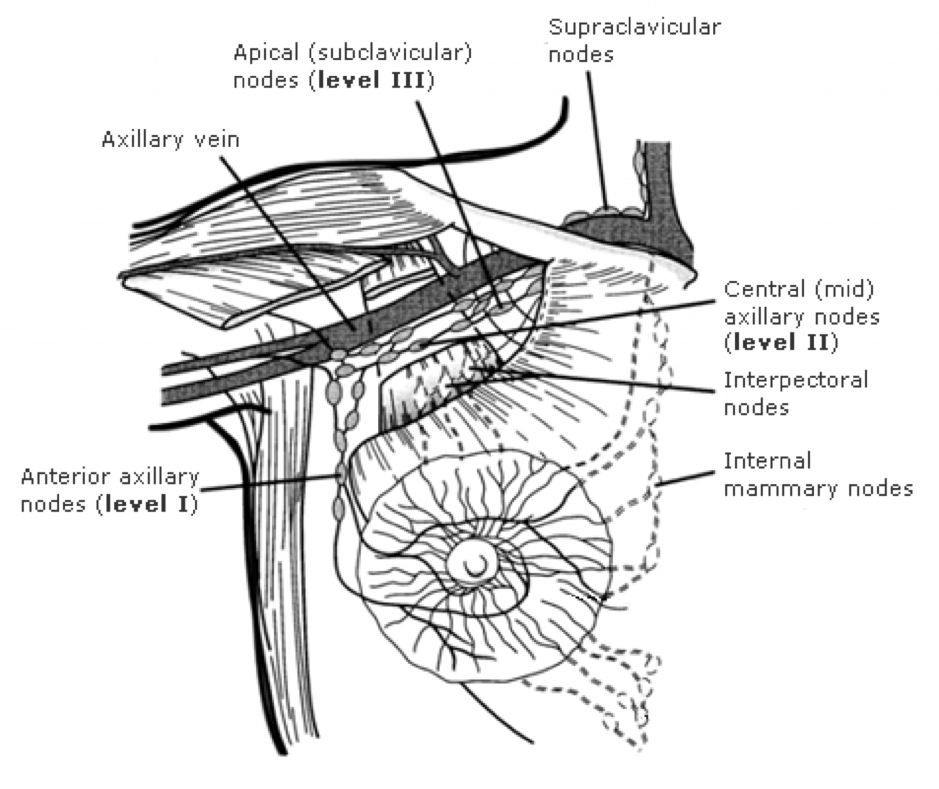