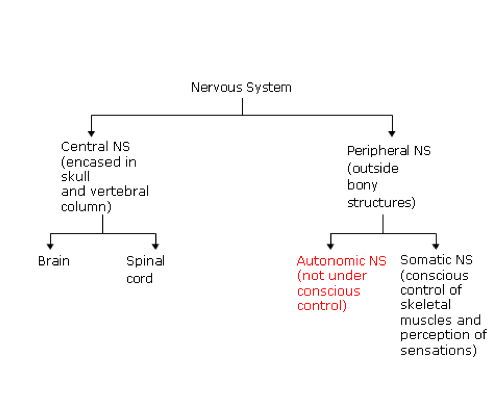 The autonomic nervous system (ANS) regulates the functions of the viscera whether we are awake or asleep. It has a prime role to play in the homeostatic mechanisms which enable us to function as a whole.

Two divisions of the ANS are commonly identified (Fig 1), which are the:

Sometimes a third division, the enteric nervous system is described. This consists of a network of neurons which form plexuses around the gastrointestinal tract. Although this network can, to a degree, function independently, it is controlled by the SNS and PNS.

For the remainder of this and the subsequent session, we will assume that the ANS has only two divisions. 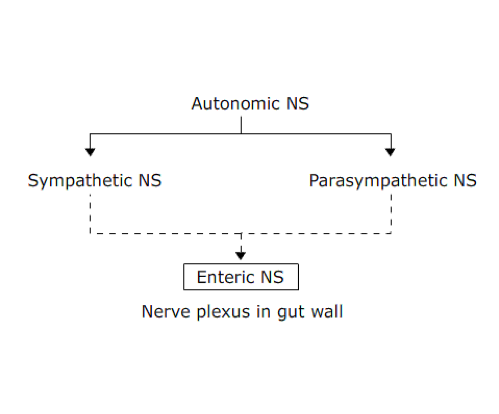 The homeostatic roles which are characteristic of the ANS primarily involve the following brain structures:

The medulla and hypothalamus process the sensory input of information and organise an appropriate motor output for the two branches of the ANS.

Some, but not all, pathways linked to the autonomic NS pass down the spinal cord from the brain

The following are some of the prominent responses to sympathetic activation:

Most synapses between nerves occur within the CNS. Structures outside the CNS where cell bodies, and therefore synapses, occur are referred to as ganglia. Synapses do not occur in sensory ganglia such as dorsal root ganglia and the trigeminal ganglion. 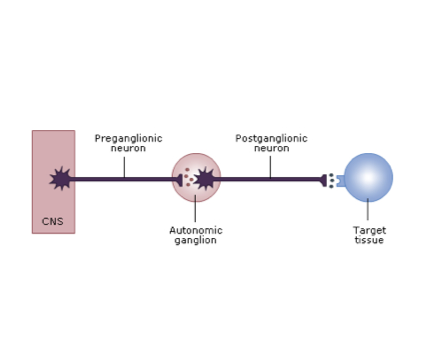 In an acceptable anatomically-based definition, the sympathetic and parasympathetic nervous systems are described in terms of the location of the preganglionic neurons and the paths by which the autonomic nerves emerge from the CNS. 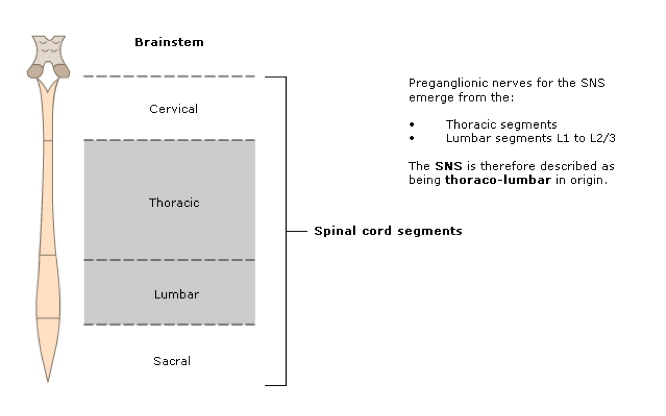 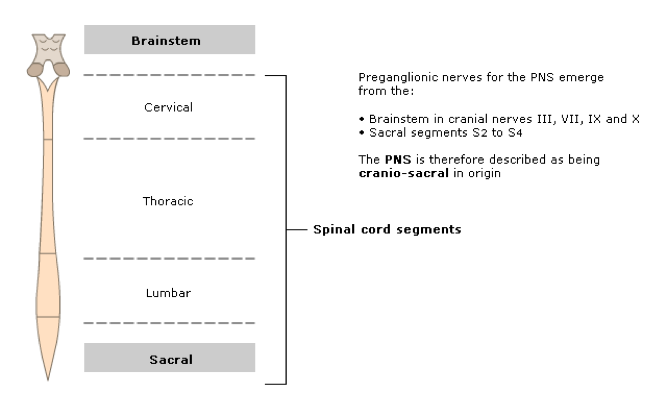 CNS Control of the ANS

Lower brainstem structures, particularly the nucleus tractus solitarius (NTS) in the medulla, receive information from chemoreceptors, baroreceptors and most non-pain inputs from abdominal and thoracic viscera.

Information is processed in the brainstem and is passed up to forebrain structures, especially the hypothalamus.

Brainstem nuclei, particularly the NTS, organise the autonomic outflow responses. Some brainstem structures have specific roles in relation to a single defined autonomic function. An example is a group of neurons in the rostral ventrolateral medulla which selectively regulates sympathetic outflow to the cardiovascular system without affecting the sympathetic control of other structures.

Other nuclei in the brainstem can determine the overall level of sympathetic tone, thus affecting a range of target tissues.

The functioning of the ANS is usually considered to be independent of conscious control. However, limited reductions in heart rate and blood pressure can be achieved by some forms of meditation. The mechanisms involved are not well understood.

Sudden stress situations can effectively override the normal autonomic control loops to produce, for example, an acute increase in blood pressure. This is a short-term response rather than a sustained increase in blood pressure. Such responses, which must initially involve the cortex, are effectively achieved by limbic system structures temporarily modifying hypothalamic control.

There are many potential causes of autonomic dysfunction, including:

These dysfunctions illustrate the normal physiological roles of the autonomic NS.

Horner’s syndrome is the result of the loss of sympathetic innervation to one side of the face.

The characteristic deficits are a drooping eyelid (ptosis), backward displacement of the eyeball into the orbit (enophthalmos), small pupil size (miosis) and lack of sweating (anhydrosis). Depending on ambient temperature, loss of sympathetic vasoconstrictor tone will lead to facial flushing on the affected side.

Defects leading to Horner’s syndrome may potentially occur at several different levels in the autonomic control pathways described above.