The appendix is very variable in position. It may be:

The wide range of positions accounts for the range of differential diagnoses possible in a patient presenting with suspected appendicitis.

Embryologically, the vermiform appendix is a direct continuation of the caecum. It does not elongate like the rest of the colon forming a worm-like structure.

This narrow diverticulum arises from the posteromedial aspect of the caecum about 2 cm below the ileocaecal orifice.

The appendix has its own short mesentery, the mesoappendix, which arises from the inferior layer of the mesentery of the terminal ileum.

Position of the appendix

On a CT scan, the appendix can be visualised arising from the base of the caecum, especially when it is inflamed.

The iliacus and psoas muscles lie posterior to the caecum. The position of the appendix is variable in nature, although its base is constant in position arising from the caecum at the point of coalescence of the three taeniae coli 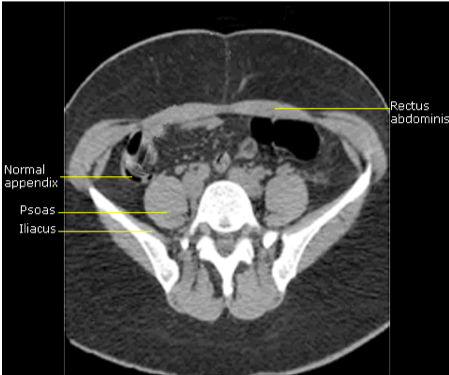 Length of the appendix

The length of the appendix is quite variable ranging between 1 and 25 cm with an average of 5–10 cm.

The only invariable feature is that it arises from the caecum at the point of coalescence of the three taeniae coli.

The diameter of the appendix is less than 10 mm. This may be used to help diagnose appendicitis by ultrasound

The variable position of the appendix means that a surgical approach requires use of the surface landmark of the caecum as the site of an incision.

This is known as McBurney’s point: 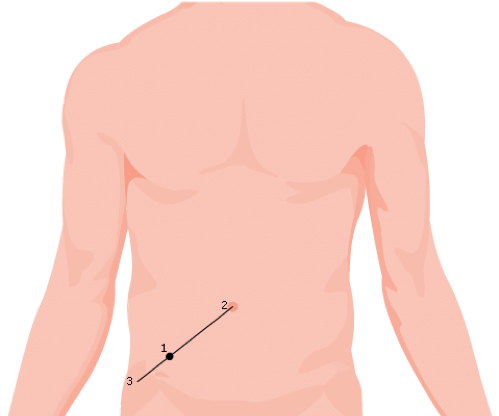 McBurney’s point is one-third of the distance from the anterior superior iliac spine to the umbilicus. This point roughly corresponds to the most common location of the base of the appendix where it is attached to the caecum.

What is the appendicular artery?

The appendicular artery is a branch of the inferior division of the ileocolic artery.

This vessel courses posterior to the terminal ileum to enter the mesoappendix.

An accessory artery occasionally arises to anastomose with the posterior caecal artery.

The appendix histologically has a mucosa consisting of colonic epithelium, a submucosa and two complete muscular layers, an inner circular and outer longitudinal layer. The longitudinal layer is a continuation of the taeniae coli which coalesce at the base of the appendix.

The submucosa contains numerous lymphatic follicles which enlarge in childhood peaking in size between 12-20 years.

The mucosa has crypts but no villi. The epithelium is lined by columnar cells, goblet cells but no Paneth cells. The lamina propria and submucosa are similar to those of the small intestine.

The appendiceal lumen is wider in the young child and may be obliterated in old age.

What is thought to cause appendicitis in young children?

Appendicitis is thought to occur because of luminal occlusion by a faecolith.

The most common position of the appendix during appendicectomy is the retrocaecal position.

The appendicular artery runs first in the free margin of the mesoappendix and then close to the appendicular wall, where it may be thrombosed in appendicitis, leading to ischaemic necrosis.