The free surface of the peritoneum has a layer of flattened mesothelial cells which are kept moist and smooth by a thin film of serous fluid. The potential peritoneal spaces, the peritoneal reflections forming peritoneal ligaments, mesenteries and omenta, and the natural flow of peritoneal fluid determine the route of spread of intraperitoneal fluid and disease processes within the abdominal cavity.

By the end of the 4th week of embryonic development, the intraembryonic coelomic cavity has been formed by folding of the embryonic disc.

The intraembryonic coelomic cavity is lined by mesoderm which encloses the primitive gut and forms the peritoneum.

The outer or somatic mesoderm, lining the cavity, forms the parietal layer (lining the peritoneal cavity) and the inner or splanchnic mesoderm forms the visceral layer (covering abdominal organs).

B. The intraembyronic coelomic cavities are about to lose their contact with the extraembryonic coelom

C. At the end of the 4th week, the splanchnic mesoderm layers are fused in the midline and form a double-layered membrane between right and left embryonic coelom. The ventral portion of this membrane, however, breaks down immediately after its formation. 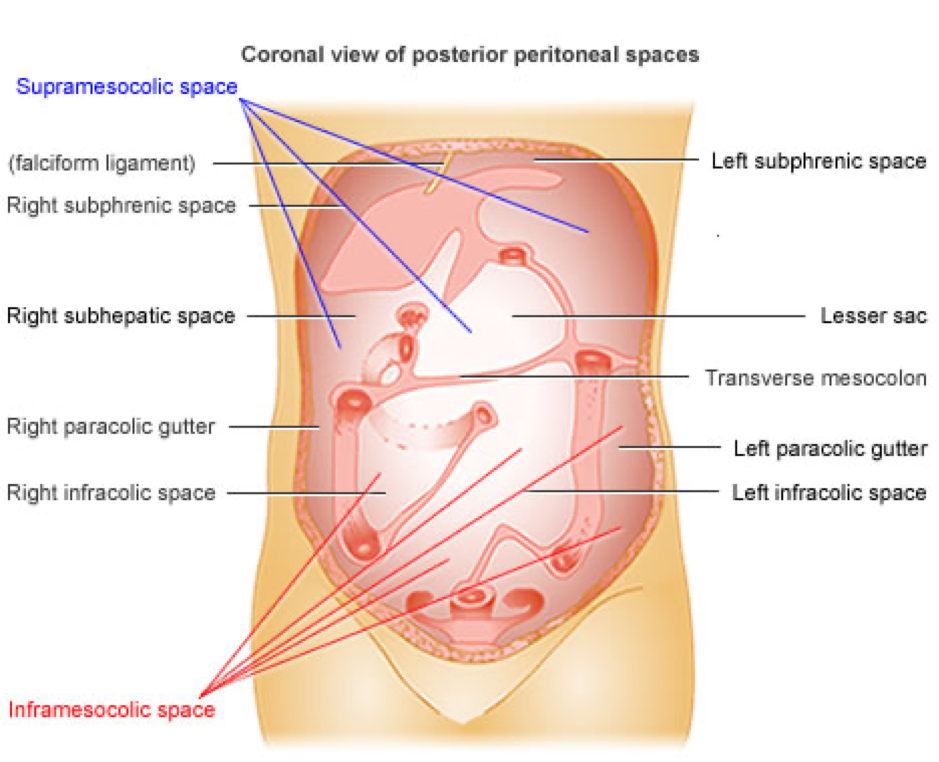 The peritoneal cavity is a space between the parietal and visceral peritoneum, which are the two membranes that separate the organs from the abdominal wall.

The peritoneal cavity is divided into two main compartments, the supramesocolic space and inframesocolic space, by the transverse colon and its mesentery connecting it to the posterior abdominal wall. The root of the transverse mesocolon extends across the infraampullary segment of the descending duodenum, the head of the pancreas, and continues along the lower edge of the body and tail of the pancreas.

The lesser sac extends to the left, behind the stomach and anterior to the pancreas. It communicates with the rest of the peritoneal cavity through a narrow inlet, the epiploic foramen (foramen of Winslow), between the inferior vena cava and the free margin of the hepatoduodenal ligament. 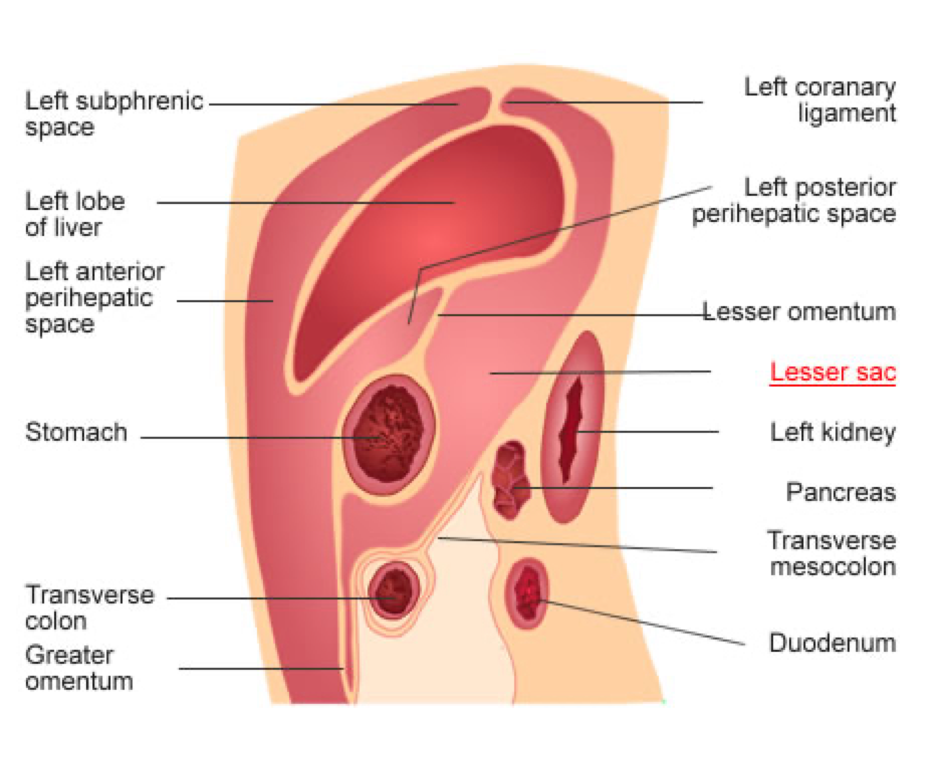 A prominent oblique fold of peritoneum is raised on the posterior wall of the lesser sac by the left gastric artery, dividing it into two major recesses. The smaller superior recess completely encloses the caudate lobe of the liver. At the porta hepatis this recess lies posterior to the portal vein. Superiorly it extends deep into the fissure for the ligamentum venosum and posteriorly lies adjacent to the right diaphragmatic crus.

The larger inferior recess lies between the stomach and the pancreas. It is bounded inferiorly by the transverse colon and its mesentery, but can extend for a variable distance between the leaves of the greater omentum. To the left, it is bounded by the gastrosplenic and splenorenal ligaments which meet at the splenic hilum.

Clinically, fluid collections in the pelvis spreading to the left supramesocolic space, for example the left subphrenic space, do not generally involve the lesser sac. 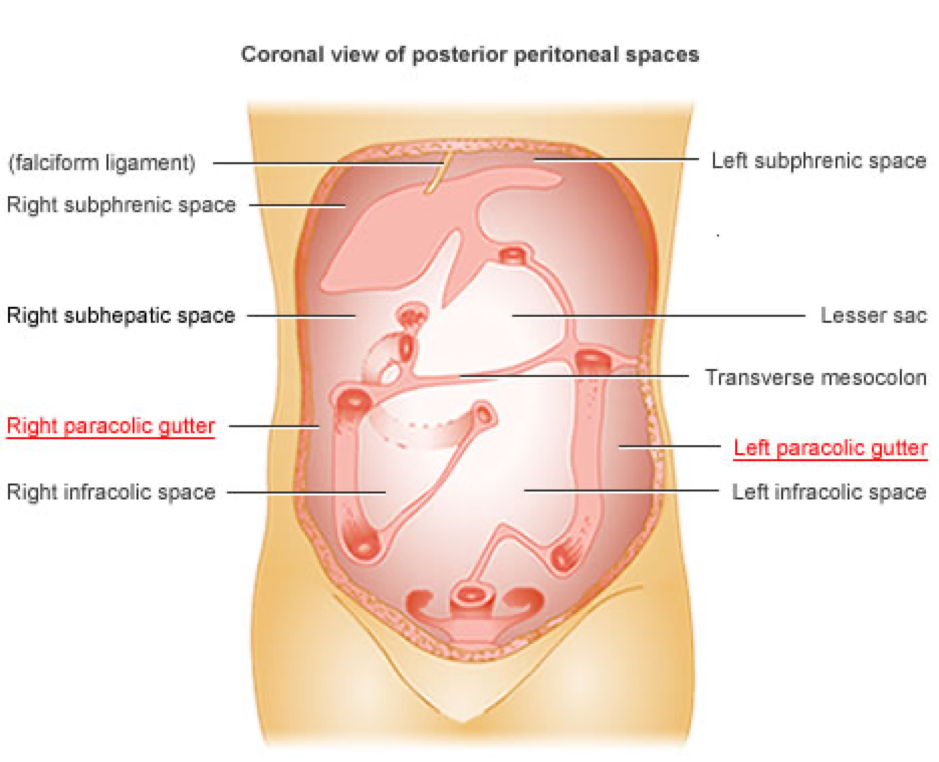 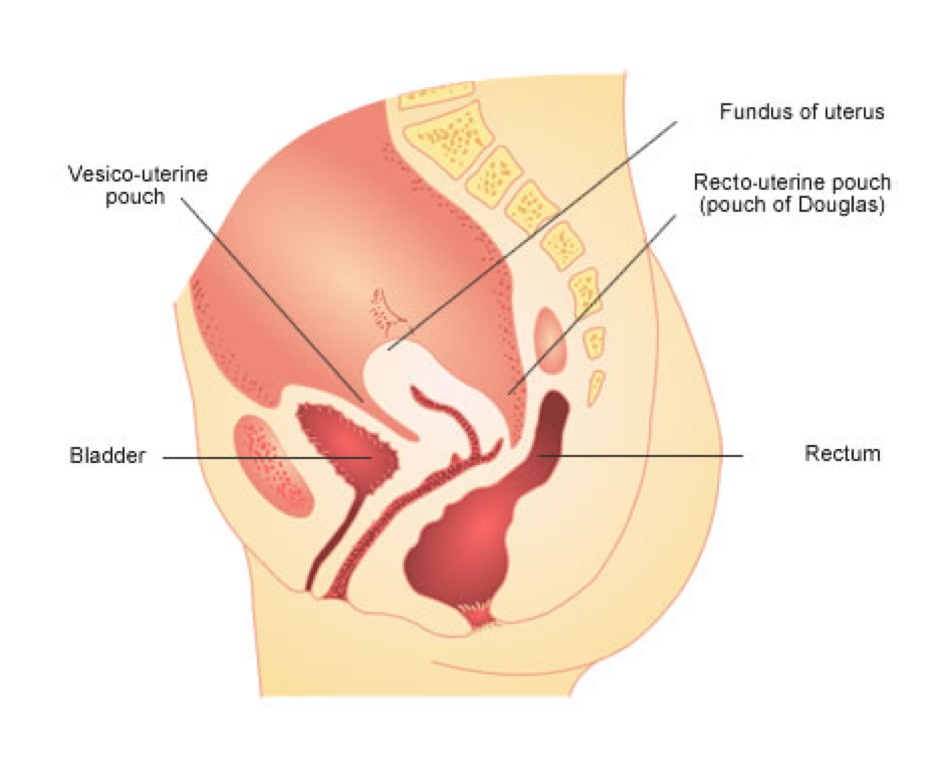 Inferiorly, the peritoneum is reflected over the fundus of the bladder, the anterior and posterior surface of the uterus and upper posterior vagina in females, and on to the front of the rectum at the junction of its middle and lower thirds. The urinary bladder subdivides the pelvis into right and left paravesical spaces. In men, there is only one potential space for fluid collection posterior to the bladder, the rectovesical pouch. In women, there are two potential spaces posterior to the bladder, the uterovesical pouch, and poterior to the uterus the deeper rectouterine pouch (pouch of Douglas). The layers of peritoneum on the anterior and posterior surfaces of the uterus are reflected laterally to the pelvic side walls as the broad ligaments, containing the uterine (fallopian) tubes.

There are three types of double layers of the peritoneum:

An omentum is a double layer of peritoneum that attaches the stomach to another viscus. There are two Omental:

The greater omentum is the largest peritoneal fold, consisting of a double sheet folded upon itself and thus made up of four layers.

The two layers of peritoneum descend from the greater curve of the stomach and proximal duodenum passing inferiorly, anterior to the small bowel for a variable distance, and then turn superiorly again to insert into the anterosuperior aspect of the transverse colon.

The left border is continuous with the gastrosplenic ligament; the right extends as far as the orgin of the duodenum.

The lesser omentum (gastrohepatic ligament) is the fold of peritoneum extending from the lesser curvature of the stomach and proximal 2 cm of the duodenum to the liver.